A man-made beast. This is the story about the wave and those who live it.

The Wedge, located at the end of the Balboa Peninsula in Newport Beach, California, is a world famous, man-made beast of a wave. Since its creation, people have flocked from all over to see it in its mythical form. Wedge waves can be as powerful as any on Earth. It is a place where injuries are common and where even deaths have occurred.

Dirty Old Wedge is a documentary film that will showcase the history of the Wedge starting from its creation in the 1930’s. A unique assemblage of bodysurfers which has come to be known as the “Wedge Crew” will be one of the focal points of this film, highlighting their relationships with the wave and with one another. 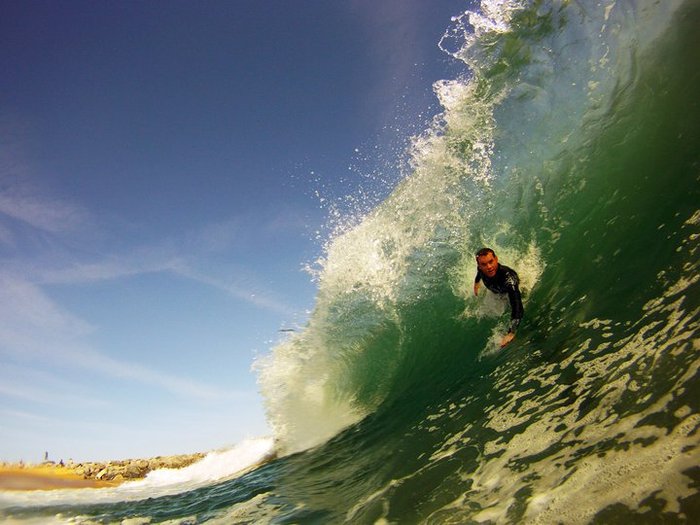 Tim Burnham is a 33 year old Southern California native that has been riding the Wedge (board or no board) on a regular basis for the past 16 years He has a strong passion for the history of the Wedge and carries a strong sense of respect for those that have come before him. After getting to know and befriending many of the elder Wedge Crew members, he realized that there was an incredible story that needed to be told. Not only of the wave, but of the people that ride it.

Although his background isn’t in film, with the assistance of his extremely talented friends Jack Murgatroyd, and Edwin Eversole, the story of the Wedge could now be brought to life.

Jack has pursued his passion for surf films from a young age. The Pt. Dume Malibu local has since honed his craft for editing at the school of Cinematic Arts at USC. As lead editor on the USC Senior thesis “Ellen” he was awarded “Best Editing” at the USC First Look film fest and continues cutting film to this day. Since graduation, he has teamed up with his fellow classmate Edwin Eversole and founded Hunt House Pictures, a Venice based commercial and music video production house.

Edwin earned a spot in Santa Barbara’s International Film Festival at the age of 17 by way of a Documentary shot on location in Thailand and produced out of Santa Barbara in 2005. His career continued on at 18 years of age with a South African elephant documentary which made its way into several festivals. Since graduating from USC Cinema Production, Edwin is primarily a commercial director of photography and editor who has worked with Disney, Build a Bear, and OTZ Shoes. The Dirty Old Wedge will be his first documentary since South Africa in 2006. Edwin currently works with co-founder Jack Murgatroyd under the commercial production company Hunt House Pictures.